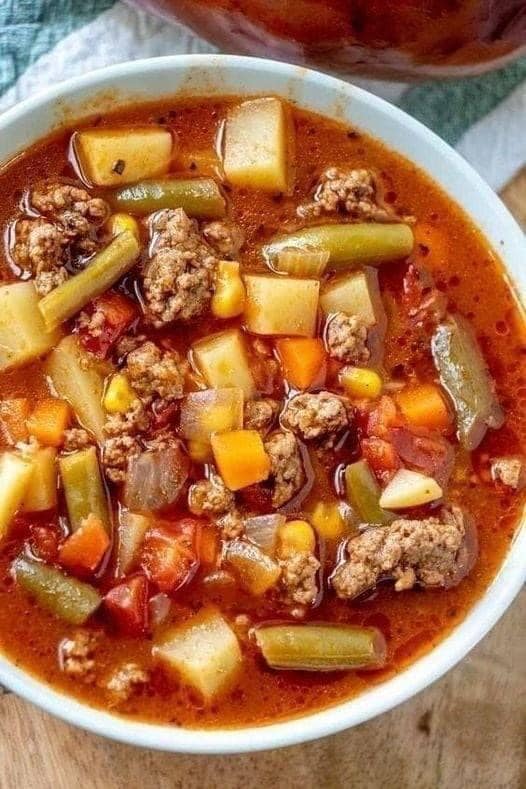 INGREDIENTS LIST:
One large spoon.Of virgin olive oil.
2 Lbs.Of beef stew meat.
To season, I used sea salt and cracked pepper.
Hald a Cup.Of chopped onion.
3 medium carrots, you need to peel and slice them.
2 celery stalks, I sliced them.
2 small spoons.Of minced garlic.
Canned diced tomatoes, I used the largest can of 28-ounces, undrained.
1½ small spoons.Of Italian seasoning.
One bay leaf.
Beef broth, I used approximately seven cups.
2 large Russet potatoes, I peeled and cut them into ½-inch pieces.
½ Cup.Of frozen corn.
½ Cup.Of frozen peas.
¾ Cup.Of frozen cut green beans.
2 large spoons.Of chopped parsley.
.
PREPARATION:
Step 1:
Before I started the preparation of this recipe, I seasoned the stew meat with salt and pepper, and then I allowed it to sit for approximately 20 minutes.
Step 2:
Secondly, I chose a large skillet, and I heated in the olive oil over medium-high heat until shimmering.
Step 3:
After I coated each side with salt and pepper, I arranged half of the meat in the pan In a single layer, and I cooked it for around three or four minutes per side until were well browned.
Step 4:
And I repeated the same process with the rest of the meat, and when I finished, I placed the browned beef on a dish and covered it with aluminum foil to keep it warm.
Step 5:
At this step, I placed the chopped onions, carrot slices, and celery in the pan and cooked until the vegetables were soft, it took around 5 minutes, until the vegetables were completely tender.
Step 6:
Following that, I added two small spoons of minced garlic, and I cooked the vegetables for an additional 30 seconds.
Step 7:
Then I transferred the meat and cooked vegetables to a large pot, along with the canned tomatoes, Italian seasoning, bay leaf, and seven to eight cups of beef broth, and I heated everything through, and I brought it to a gentle low simmer for about 60 minutes, until the meat was tender.
Step 8:
Following that, I added the potato slices, and I continued the cooking for a further 20 minutes until the potatoes were cooked.
Step 9:
And I stir in the corn, peas, green beans and cooked them for 5 minutes on medium heat. Season the soup to your liking with salt and pepper to taste.
Step 10:
Lastly, I removed the bay leaf, set it aside, and I served the soup warm with a sprinkle of parsley on top of each serving.
TIPS FOR MAKING THIS VEGETABLE-BEEF SOUP AMAZING:
Plan ahead of time since the meat in this soup has to be simmered for at least an hour in order to become soft.
After simmering with the meat for many hours, the carrots, onions, and celery have become quite soft. If you like crisper vegetables, you may sauté the vegetables first, then remove them from the pan and set them aside to be added later, along with the potatoes.
I prefer to serve the veggie beef soup with a side of bread; it’s really delicious!!! 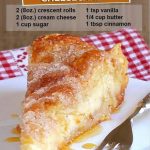 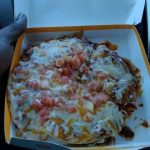